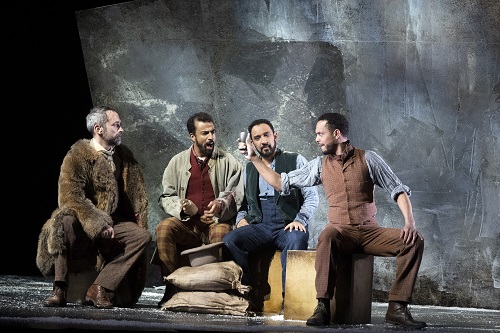 Still they come — and come again, as in this English Touring Opera revival of James Conway’s production of La bohème. The work’s popularity shows no sign of abating, and why, one might ask, should it? It is a fair question, up to a point, especially when considered vis-à-vis the many lesser works that make up much of opera’s benighted ‘core repertoire’. It is a well-nigh perfectly crafted work, remarkably concise and accomplishing so much within four short acts, one might be tempted to ask further, ‘why should operas be longer?’ Many are not, of course, and many do not need to be. Monteverdi, Mozart, Wagner, and a few others one often regrets they are not longer still, yet appreciates the craft and integrity that ensured they were not. Puccini, however, gets things just right on his own terms and attracts newcomers and old-hands alike.

All too rarely — and this is a sadness — is it on account of the productions his operas, still less this particular opera, receive. Stefan Herheim’s staging remains the only one I have seen (alas, only on video) to accomplish something of great interest in the way one might naturally expect of the composers mentioned above, or indeed most others. If I cannot say Conway’s production joins Herheim, it has far better excuse than those intended for larger houses. It is not trying to do so, but rather intelligently presents a more or less ‘traditional’, unquestionably resourceful Bohème suited for touring across the country, often to towns that might otherwise not receive a single opera performance all year. Revived with equal intelligence by Christopher Moon-Little, there is thus nothing to complain about and indeed much to cherish. A realism that is yet not quite realistic, suggestive, as Conway proposes in the programme, of dream memories is just the thing — all the more so when one thinks about it. Puccini’s Bohemians (perhaps all the more so Henri Murger’s) will at some point get over ‘it’, however all-encompassing it might seem to them at the time; at least, the men will. And the women, the civettas or grisettes (on whom, read Moon-Little’s splendid programme note), well, they are fated to be remembered only by those ultimately shallow artists-turned-gentlemen. There is much enlightening observation; I cannot recall a production/performance that brought to one’s attention so clearly the importance of Schaunard’s being a musician, for instance. Nothing gets in the way; the story is clearly told. I was unsure why Parpignol had become ‘Pa’Guignol’ but his puppetry — perhaps that was enough reason — adds a welcome sense of bite, which might with benefit have been extended further. As discussed, though, that was doubtless not the aim here.

It helped greatly to have for once a youthful cast for whom no disbelief needed to be suspended. That cuts both ways: one appreciates the callowness — at least from jaundiced middle-age — as well as the attraction of ‘Bohemian’ life, but that is surely as it should be and is no comment on the artistry involved. If Hackney cannot be home to a tale (partly) about hipsters, where can? Each of the central male quartet was splendidly distinguished, by voice, character, even costume, whilst at the same time forming a coherent ‘group’. Michel de Souza’s ardent Marcello was, rightly, a keen match for Luciano Botelho’s sensitive portrayal of Rodolfo. Trevor Eliot Bowes and Themba Mvula impressed as much as any Colline and Schaunard I can recall. Francesca Chiejina and April Koyejo-Audiger offered keenly observed performances which evidently developed over time as Mimì and Musetta: no stock gestures here. What I missed was a greater sense of chemistry between the pairs of lovers, leaving enjoyable performances that never quite moved. Perhaps, though, that was my fault, or perhaps it was even the point. Diction throughout was excellent, though the surtitle translation was often strange: ‘kind regards’ should surely remain the stuff of passive-aggressive e-mail.

Bryan Higgins’s chamber orchestration (twenty-seven players, strings 6.4.2.2.1) works very well, even in a large theatre such as the Hackney Empire. That does not negate, but rather supports, the achievement of the orchestral players themselves: as varied of tone and dynamic contrast as they were incisive. At the big moments, one might well have been listening to band three times the size. Intimacy came off just as well. Smaller theatres, ETO’s touring bread and butter, will have a treat in store. Orchestra, cast, and score were ably conducted by Dionysis Grammenos, if sometimes the music and thus the drama stopped and started a little too much for my liking. Others, though, may have found a certain lack of ‘symphonic’ continuity, for want of a better adjective, in keeping with the cinematic anticipations of the work. At any rate, there was no doubting the concision. Now for ETO’s new production of the season, Rimsky-Korsakov’s Golden Cockerel.