English National Ballet’s Emerging Dancer competition returns to screens around the globe next month, broadcast live from the Company’s east London home, the Mulryan Centre for Dance, on Thursday 19 May.

The annual competition recognises the excellence of English National Ballet’s artists. Selected by their peers, six of the Company’s most promising dancers perform in front of an eminent panel of expert judges, before one is named the winner of the Emerging Dancer Award.

Emerging Dancer 2022 is supported by CHANEL, extending the House’s 100-year legacy of cultural engagement to imagine the next.

Tamara Rojo CBE, Artistic Director of English National Ballet, said: ‘I am proud that as a Company we come together each year to nominate some of our most talented colleagues and give them a fantastic opportunity to develop, collaborate with choreographers, learn new repertoire, and shine on stage. This event celebrates the bright future of ballet, and it is always a joy and a privilege to watch. I wish all six of the finalists the best of luck and hope they enjoy the process over the coming weeks.‘

The recipients of the People’s Choice Award, voted for by audiences throughout the Season, and the Corps de Ballet Award, which acknowledges the work on and off-stage of an Artist of the Company, will also be revealed. There will be special performances by the reigning Emerging Dancer winner Ivana Bueno and the 2020 People’s Choice Award winner Victor Prigent. English National Ballet Philharmonic will perform live as part of the evening’s proceedings, conducted by Timothy Henty, and ENB First Soloist Fabian Reimair will create a piece of music to accompany one of the contemporary pieces.

The livestream of the Emerging Dancer competition will be available to watch for free on YouTube at 7.30pm (GMT) on Thursday 19 May 2022.

Further information on repertoire will be announced shortly.

Tamara Rojo CBE, English National Ballet’s Artistic Director, said: ‘This is a Season that truly celebrates the great tradition of classical ballet alongside the innovation and creativity of contemporary repertoire. English National Ballet is committed to bringing world class ballet to the widest possible audience and so I am particularly delighted to return to UK touring – we can’t wait to perform for audiences at our partner venues around the country.‘

Having received its world premiere at the London Coliseum in January 2022, Raymonda by English National Ballet’s Artistic Director Tamara Rojo CBE, after Marius Petipa, will be performed at the Bristol Hippodrome (23 – 26 November 2022) and Southampton’s Mayflower Theatre (30 November – 03 December 2022).

Updating the ballet’s setting to the Crimean war and drawing inspiration from the groundbreaking spirit and work of the women supporting the war effort, including Florence Nightingale, Raymonda is recast as a young woman with a calling to become a nurse. Starring a huge cast of dancers, this critically acclaimed adaptation with UK sponsorship from Cunard, keeps the best of the 19th-century original including Alexander Glazunov’s score, adapted and edited by Gavin Sutherland and Lars Payne, which is performed live by English National Ballet Philharmonic.

Also touring this autumn is English National Ballet’s hugely successful production of the timeless classic, Swan Lake, which will be performed at the Liverpool Empire (28 September – 01 October 2022) and Manchester’s Palace Theatre (05 – 08 October 2022) followed by the London Coliseum (12 – 22 January 2023). Choreographed by Derek Deane, the production features some of the most iconic scenes in ballet and will be performed to Tchaikovsky’s glorious score played live by English National Ballet Philharmonic.

Tamara Rojo said: ‘It is a huge honour and a privilege to have Mats Ek create a new work on the Company. He is a master choreographer with a long history of impactful and imaginative works, and I can’t wait to see him create closely with our dancers.‘

The new work will be performed alongside Take Five Blues by English National Ballet’s Associate Choreographer, Stina Quagebeur, and William Forsythe’s Blake Works I. Originally created for the Company’s 2020 Digital Season and first performed on stage when theatres reopened in spring 2021, Take Five Blues is a joyous exploration of contemporary jazz and classical music which will be extended to a longer one act ballet. Blake Works I is a soulful piece for 21 dancers set to seven songs from James Blake’s album The Colour in Anything, first performed by English National Ballet in spring 2022.

Continuing its annual festive tradition, English National Ballet will present Nutcracker at the London Coliseum over the Christmas period (15 December 2022 – 07 January 2023). This much-loved version, choreographed by Wayne Eagling, features over 100 dancers and musicians who bring to life the popular Tchaikovsky score featuring the Dance of the Sugar Plum Fairy and Waltz of the Flowers, performed live by English National Ballet Philharmonic.

Following its debut performances in London and Chicago,Creature by Akram Khan returns to the Sadler’s Wells stage in spring 2023. Creature is an unearthly tale of exploitation and human frontiers inspired by Georg Büchner’s expressionist classic Woyzeck, with shadows of Mary Shelley’s Frankenstein. Drawing on themes of abandonment, isolation and the fragility of the mind, it is the tale of an outsider and the search for belonging.

English National Ballet remains committed to developing and nurturing talent. Recognising the excellence of the Company’s artists, our Emerging Dancer competition will be presented in spring 2023. This annual celebration sees six selected finalists mentored by their peers to perform in front of a panel of eminent judges. The winner of Emerging Dancer is announced alongside the People’s Choice Award and the Corps de Ballet Award, introduced to recognise the hard work and dedication of an exceptional member of the corps.

English National Ballet’s Emerging Danccer Compeition 2022 – The annual competition, which started in 2010, celebrates the excellence of the Company’s artists. Selected by their colleagues, six of our most promising dancers receive individual coaching and mentoring from their peers, before performing a contemporary and classical piece in front of an eminent panel of expert judges where one will receive the 2022 Emerging Dancer Award. It is set to be a fantastic evening of dance and celebration of talent!

This year’s competition will take place on the evening of Thursday 19 May and will be live streamed for free on YouTube. The six finalists and further information about this year’s event, including choreographers, judging panel and host will be announced in due course. For more information CLICK HERE. 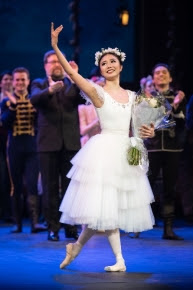 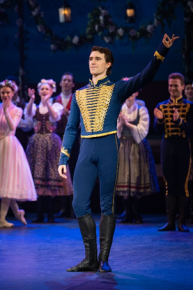 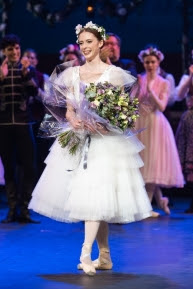 Since Tamara’s appointment to the role in 2012, she has gained acclaim for artistic excellence and creativity by introducing ground-breaking works into the Company’s repertoire, whilst continuing to celebrate the tradition of great classical ballet and attracting world-class talent. She has evolved the artform with bold commissions from both established and emerging creatives, including more than 40 works choreographed by women across English National Ballet’s programming.

Tamara led the Company into a new chapter in 2019, by moving it into the RIBA award-winning Mulryan Centre for Dance, a purpose-built, state-of-the-art new home in east London. Here, Tamara’s ambition to connect with more people and demystify the artform came to the fore, with a renewed commitment to public access, community engagement and digital innovation. Her investment in the future of ballet continued, with the introduction of forward-focused programmes including internal dancer development initiative, Dance Leaders of the Future, and Ballet Futures, a children’s training programme which aims to diversify the talent pipeline.

Throughout the immense challenges of the last two years, Tamara has been a dedicated advocate, not just for English National Ballet but for the wider creative industries, making the case for the importance of the arts and demonstrating the strength, resilience, and collective determination within the industry to persevere and innovate.

Later this month, Tamara will make her choreographic and directorial debut with Raymonda, her first full-length ballet which English National Ballet will perform at the London Coliseum.

ENB will appoint an Artistic Advisory Panel to support the board in the search for a new Artistic Director. Tamara will remain in her post until late in the year to ensure a smooth transition.

Tamara Rojo said: ‘It has been an honour to have led this extraordinary company for the last 10 years. I am incredibly proud of all that we have achieved together, from the tremendous talent working within and alongside the Company, to creating and moving into the amazing new building we now call our home, to the off-stage communities we have established with our education and engagement work.

English National Ballet’s fundamental aim to bring world-class ballet to the widest possible audience has always resonated with me. It is the reason the Company has been a part of my life for so many years, from performing here as a dancer early in my career, to returning as Artistic Director in 2012. My admiration and support do not end here, I will remain invested in English National Ballet’s continued success in the years to come.

It has been a privilege to be the custodian of English National Ballet and as I prepare to hand over the reins, I am confident that this world-class company which is at the forefront of ballet’s growth and evolution with a much-deserved place on the international stage, will continue to flourish and thrive.’

English National Ballet’s Chair, Sir Roger Carr, said: ‘Tamara is a remarkable person whose vision, intellect and energy has propelled English National Ballet to new heights. The Company has outstanding dancers, a fine building with state-of-the-art facilities and a repertoire strengthened by significant new works. Collectively, these assets will provide a strong foundation on which the new Artistic Director can build the next exciting chapter in the life of this remarkable Company.

After ten years at the helm, the legacy that Tamara leaves will be long lasting and it is hoped that in her new position in San Francisco she will have the opportunity to capitalise on past achievements and build a bridge between these two great ballet companies for joint endeavours to our mutual benefit. I speak on behalf of us all at the English National Ballet when I offer my sincere thanks and wish Tamara every success in the future.’