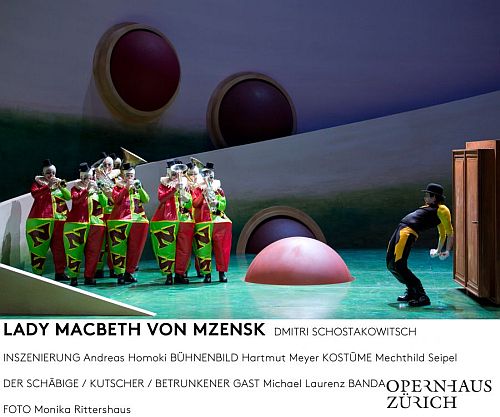 When I last saw this opera some decades ago, with its brutality of action, and shrillness of music, in a production in monochrome, I found the work bleak and depressing. What a difference an injection of vibrant colours, amusing costumes and some humour makes!

We have opera Intendant Andreas Homoki to thank for this impressive production, his second in charge of the Zurich Opera. He assisted Harry Kupfer 25 years ago with Lady Macbeth in Cologne and when Kupfer broke his foot, had to step into Kupfer’s shoes. Shostakovich described the opera as “tragic and satirical”; Homoki paints almost all the characters outside the two principals (Katerina and Sergei) as grotesque caricatures. The brass band, normally set aside in a side box, wobble onto stage as circus or carnival clowns; Boris, the evil father-in-law, is the dishevelled circus ringmaster. His weak hunch-backed but wealthy son, Sinowij, comes straight out of P.G. Wodehouse. The policemens’ arrival reminded me of a combination of Dad’s Army and the policemen in “Pirates of Penzance”.

The set consists of a long white curving ramp, a background of green, orange and pink, a rusty brown metal container which serves as the Ismailov’s house in the early Acts, and later as a sort of cattle truck to transport the convicts to Siberia. The singers have to clamber onto the roof of the container at various stages to view the action. Dotted around the stage are 5 round openings; when Katerina is threatened or enclosed, a pink ball appears from behind or underneath to close the opening – fairly explicit sexual imagery. Although the drama includes a number of rapes, sexual assaults, floggings and murders, Homoki is careful not to revolt or upset his audience. All these events are staged sympathetically; nevertheless this is most definitely not a show to take the children.

German soprano Gun-Brit Barkmin was simply stunning as Katerina, her acting skills every bit as fine as her singing: she has very difficult music to master and is impressive, never having sung the role before (she has sung Jenufa, Salome, Emilia Marty and Ellen Orford in the past). Her lover Sergey is sung by American tenor, Brandon Jovanovich, firm both of tone and physique. Veteran Austrian bass Kurt Rydl, as the father-in-law Boris, still has plenty of tone but sadly the richness has gone out of the voice and at times he could not ride the orchestra. He also seemed to need constant and audible assistance with his Russian from the prompter.

All the minor roles were sung competently, but one stood out: Pavel Daniluk as the Priest who comes on later as the Old Convict – as in Mussorgsky’s “Boris” the Old Convict/Simpleton is always surprisingly astute and has virtually the last word, to some very moving music. His Russian diction was, to my ears, of all the singers, the most authentic-sounding.

There is much beauty in the score, and some militaristic bombast: the orchestra (particularly the woodwind and brass) plays magnificently for the impressive young Greek conductor Teodor Currentzis, who is an Opera Director in Perm (Russia). His flowing baton-less gestures showed an innate command of this difficult but beguiling score. There are many more performances, the last ones conducted by Vassily Sinaisky. Try to catch one if you can!