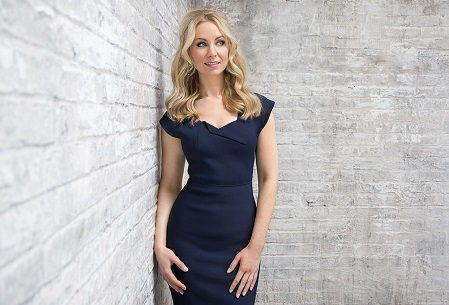 Each year the CBSO are invited to give a concert at the BBC Proms and it’s become the custom for them to perform the programme in Symphony Hall immediately before taking it to the Royal Albert Hall. They’re due at the Proms on 15 August but this concert wasn’t a straightforward preview of the Prom. London will hear the Debussy and Boulanger pieces but Daphnis et Chloé will be replaced by Ravel’s Boléro and Debussy’s Prélude à l’après-midi d’un faune. I presume this is because the Royal Philharmonic Orchestra pipped the CBSO to it in the Proms planning stage: they played the ballet right at the start of the Proms season in a programme conducted by Alain Altinoglu (review). Though the CBSO won’t be playing Ravel’s great ballet in London they will be taking it to Edinburgh when they give a concert as part of the city’s International Festival on 17 August.

I strongly suspect that when tonight’s programme was planned it was assumed that Mirga Gražinytė-Tyla would be on the podium. Indeed, I saw her conduct the Boulanger with the orchestra as recently as May (review). However, she’s now on maternity leave and instead Ludovic Morlot conducted; he’ll also lead the performances in London and Edinburgh. Mr Morlot has been Music Director of the Seattle Symphony Orchestra since 2011. He’ll step down from that post at the end of the forthcoming season. In passing I note that the Debussy Nocturnes will be included in his final programme of that season, next May. He’s been a welcome guest in Birmingham more than once in the past though my only previous opportunity to hear him live, in 2016, was thwarted by motorway closures: happily within days of that concert he made excellent recordings of two of the works from that Birmingham programme – the Ravel piano concertos (review) – albeit not with the CBSO. So, I was very keen to experience him conduct three early twentieth century masterworks by French composers.

We began with Debussy’s three miniature tone poems. Each of these pieces is subtle and fastidiously crafted and in ‘Nuages’ the veiled string sound and supple woodwinds evidenced a sensitive response to Debussy’s writing. Rachel Pankhurst’s plaintive cor anglais playing was ideally suited to the music. ‘Fêtes’ brought splashes of more assertive orchestral colouring. Morlot and the orchestra brought out the gaiety and flashing brilliance of the movement’s opening section. In the central processional episode, the distant trumpet effect was well managed and Morlot built the passage to an exciting climax before the return of the swirling music with which we had begun. I admired the way the CBSO brought off the end of the piece with its subtle half-lights.

In ‘Sirènes’ Debussy adds the colours of a wordless female chorus and for this the orchestra was joined by members of the CBSO Youth Chorus. I was interested to see the disposition of the choir, who, as usual, sang from the choir seats above and behind the orchestra. The positioning of the singers may have been conventional but the layout was not. Instead of having all the choir grouped together the singers were spaced out, positioned in pairs, one behind the other, but with a gap of about three seats between one singer and her next colleague on the same row. This imaginative layout meant that while the choir sang as a unit, with perfect unanimity, the sound was not in any way homogenised. Moreover, the differentiation between the parts was clear to hear and I appreciated the opportunity to hear the distinction between the soprano and alto lines so clearly. The young singers gave a flawless performance, singing confidently – from memory – and with fresh, pure tone. Underneath their wordless contribution the CBSO offered a nuanced account of the soft orchestral score.

I enjoyed this performance of the Nocturnes very much indeed. Ludovic Morlot paced the music beautifully and shaped it with great empathy, drawing the best out of his performers.

For Lili Boulanger’s Psalm 130 an even larger orchestra was assembled. The CBSO Youth Chorus departed, to be replaced by the full SATB forces of the CBSO Chorus, a changeover that was accomplished smoothly and with commendable efficiency.

Lili Boulanger died in 1918 at the age of just 25. She was dogged by ill health throughout her tragically short life but this did not prevent her from accomplishing a good deal. Not only was she the first female composer to win the coveted Prix de Rome (in 1913) but, even more significantly, she left behind a small but noteworthy output of music. The centenary of her death has brought about a number of opportunities to hear her works in concert and I’ve been particularly grateful for the chance to hear more than once this gripping setting in French of Psalm 130, Du fond de l’abîme. In fact, this performance was the third that I’ve heard recently. A very intense CBSO performance at the end of May, conducted by Mirga Gražinytė-Tyla (review), was followed by a seriously impressive performance just a couple of weeks ago at the Three Choirs Festival, conducted by Adrian Partington (review). Incidentally, there’s a link between these performances: in 1999 the CBSO Chorus took part in a very fine recording of Du fond de l’abîme under the baton of Yan Pascal Tortelier and the chorus master who prepared them for that assignment was Adrian Partington. The recording is well worth seeking out (review).

Reviewing that Three Choirs performance, I described Du fond de l’abîme as a ‘magnificent and profound musical cri de Coeur.’ Both previous performances justified that description and so did tonight’s traversal. Much of the composition work was done in Rome during 1914 when Boulanger was staying at the Villa Medici as a Prix de Rome winner. No doubt those surroundings were congenial. However, it’s telling that she chose to set Psalm 130, a psalm of tribulation, at a time when her native country was experiencing war and she herself must have been increasingly conscious of her own mortality.  A couple of weeks ago in Hereford Cathedral the cavernous opening of the piece sounded particularly ominous in the resonant acoustic. Tonight, in the very clear acoustic of Symphony Hall I might have missed that primeval darkness at the start but the CBSO still produced an awesome sound and, as the dramatic orchestral opening progressed the clarity with which the orchestral detail could be heard in this acoustic brought its own rewards. I’d been seriously impressed by the intensity with which the CBSO Chorus projected their music during the performance at the end of May and they were on equally telling form tonight. Their singing brought out the drama and the deep feeling in the choral writing. The Lithuanian mezzo, Justina Gringytė was a terrific soloist back in May and I was delighted to hear her reprise the role tonight. Her tone is rich and full and once again she sang her solos with tremendous feeling but never overdid the emotion to the detriment of tonal quality. She brought ideal vocal colouring to the music. Towards the end of the piece there’s a short tenor solo. This time the soloist was uncredited but I presume that Ed Harrison, a member of the CBSO Chorus again did the honours: he made a fine job of his music. I ought to correct one comment I made in the review of the May concert when I said that the fact that the tenor sang from the front row of the chorus meant that there wasn’t a true duet between the mezzo and tenor soloists. Having now experienced the work three times live, I now realise that this isn’t a duet at all: the tenor is answering the mezzo, something which isn’t readily apparent on CD.

This was a superb performance of Boulanger’s work. I thought Ludovic Morlot really got hold of the score and brought out all the deep anguish and drama that it contains. The response from both singers and orchestra was magnificent; in particular, the several immense climaxes in the piece were thrust home with tremendous power.

After the interval we heard Ravel’s complete ballet Daphnis et Chloé. What a miraculous, inventive score this is. Gerald Larner’s programme note reminded us that the work took some three years to bring to fruition, during which the composer ‘suffered agonies’ over the composition. Of course, it’s Ravel’s great achievement that the score, as presented, shows no sign of all this but, rather, unfolds seamlessly, unified by a number of motifs which bind the structure together dramatically.

The CBSO played the music superbly, all sections of the orchestra distinguishing themselves. The strings offered ravishing playing throughout while the woodwinds were nimble and supple. The brass, in which I include the horns, never forced the tone at all but made many exciting contributions while the percussion were consistently incisive. A host of principals made excellent contributions and although it’s invidious to single out one player it would be remiss not to draw attention to the playing of flautist Marie-Christine Zupancic in the ‘Pantomime’ section of Part 3. Here her playing was sensuous at first and then later on marvellously acrobatic.  The orchestra as a whole responded magnificently to the wide-ranging demands of the score. So, for example, the depiction of Dorcon was suitably heavy and awkward-sounding, emphasising the gaucheness of the character. By contrast Daphnis’s dance a few moments later was full of lithe grace. The Warriors’ Dance was red-blooded and exciting, the playing very precise. The depiction of Sunrise was absolutely gorgeous. Ludovic Morlot controlled the build-up expertly, moulding the sumptuous music to a radiant main climax. Incidentally, one benefit of hearing the full ballet as opposed to the Second Suite that Ravel extracted, is that the sunrise emerges quite naturally from the preceding narrative, rather than opening proceedings.

The chorus has a big part to play and the CBSO Chorus made a fine contribution. Nowhere was their excellence better demonstrated than in the extended unaccompanied passage that begins Part 2, Here, the choir’s tone and their dynamic shading were exemplary, as was their tuning. At the very end of the ballet, as the frenzied – but superbly controlled – ‘Danse Générale’ swept to its exciting conclusion the choir joined in to add a touch of extasy to the music.

Ludovic Morlot clearly had the measure of this great score. It seemed to me that his conducting was completely idiomatic and evidenced great understanding of the music. He displayed an acute ear for texture and ensured that rhythms were razor-sharp throughout. He has quite a compact conducting style, and though his gestures open up at climactic moments he generally eschews flamboyance. I was seriously impressed by his conducting, both in Daphnis and throughout the programme.

I did not hear the performance of Daphnis et Chloé at the Proms but both Alan Sanders, reviewing it for Seen and Heard and a colleague whose judgement I trust who heard the concert on Radio 3 were disappointed. On tonight’s showing, it’s a pity that Morlot and the CBSO forces weren’t asked to bring the ballet to the Proms. As it is, with Ludovic Morlot at the helm the CBSO and their choruses go to both the Proms and the Edinburgh Festival in fine fettle.