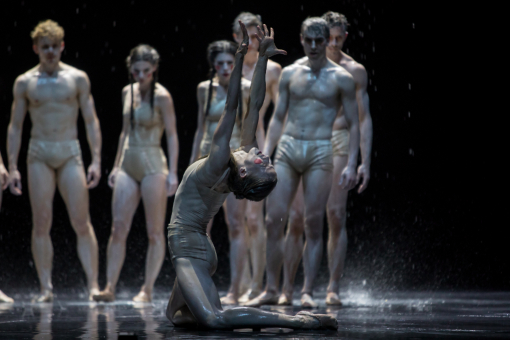 The Rite of Spring

The opening of Zurich Ballet’s season brought to town two exciting young choreographers. A further draw was the Venezuelan conductor Domingo Hindoyan, yet another product of El Sistema, the Venezuelan project assisting under-privileged musical children find to a career in music.

Marco Goecke, a young German choreographer, has been house choreographer in Stuttgart since 2005 and Nederlands Dans Theater since 2013. In the programme, he explains that the original Mikhail Fokine production of Petrushka, more than 100 years ago, was a visual orgy of a set, with windmills with multicoloured revolving arms and a plethora of market stalls with sweets. Life then was bland, so the audience cherished a show on stage. Today we are bombarded continually with visual images, so Goecke decided to reduce the staging to a bare minimum. The stage is black, the costumes are black and simple. I’m surprised someone was actually employed (and presumably paid) to design it all. The big problem with such reductions is that, unless you know the story or are cognizant of Russian folklore or had both the time and inclination to read the programme before the performance, you would have absolutely no idea who any of the characters were or what the story might be. That substantially lessens the impact of the piece. There are some visual clues as the ballet progresses: the Magician has some tinkling bells sewn into his pantaloons, Petrushka wears a grubby ruff; the Moor is portrayed by an Armenian (a fine dancer) with darker skin. What we were left with was Stravinsky’s splendid angular music and choreography that was in turn clownish and clockwork. Most attention is focused on the dancers’ arms and hands (often resembling a range of nervous disorders) rather than their feet. It was all a bit tiresome. Occasionally there are sounds and even, from Petrushka, some words ‘Ich glaube, es geht mir ganz gut’ (I think I’m quite well) just before he dies. The music alone might have saved it but for a very messy brass section.

After the interval, another Ballet Russe, The Rite of Spring. Change of choreographer, this time Romanian Edward Clug. The set was virtually identical to Petrushka, apart from a white rim around the black walls, which disappeared during the ballet. The dancers wore underwear. This was a typically bleak but thankfully not overly brutal or shocking ‘Rite’. Visually pleasing was the release of some black balloons but the undoubted highlight was the sudden release, about halfway through the ballet, of 120 litres of water (to which perhaps some wax had been added) onto the highly polished and mirrored surface of the stage. This allowed the ballerinas to be slid or whooshed across the stage at great speed, sometimes gliding like swans. It did however at times bring the television game show from the 1990s to mind, Jeux Sans Frontières (or in Britain It’s a Knockout) in which competitors were forced to climb slippery slopes, frequently falling into the water. At one point a ballerina slides gracefully towards the orchestra pit – Morecambe and Wise would have had fun. Considerable praise goes to Katya Wünsche for dancing the leading roles in both halves of the programme, combining stamina and poise.

The puddles ensured that the dancers kept their balletic leaps to a minimum (thus avoiding serious injury on landing), relying on stamps and kicks of the illuminated water droplets for stunning visual effect.

The performance left an indelible if watery imprint and was received with much applause by a young audience. No-one appeared to be troubled by the orchestral playing which was well below the orchestra’s usual standard. Conducting was undistinguished, but does anyone at the ballet notice or care?