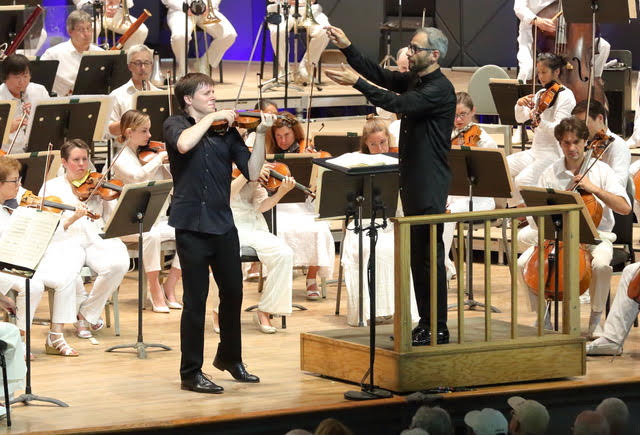 The quintessential Tanglewood experience is sitting on the lawn listening to the world’s finest musicians perform on the stage of the Koussevitzky Music Shed. This being a particularly hot afternoon, few braved the heat to sit in the direct sun; a spot in the shade was far more coveted than a proper seat in the Shed. People came early and stayed late, enjoying picnics on the lawn. Some are rather elaborate affairs: clearly, dining al fresco has been elevated into a competitive sport at Tanglewood. Sipping wine also features heavily.

Dima Slobodeniouk was making his Boston Symphony Orchestra and Tanglewood debuts in this concert. The Moscow-born conductor studied in Finland and is on the brink of what portends to be a global career. In addition to serving as principal conductor of the Lahti Symphony Orchestra in Finland, he is also music director of the Orquesta Sinfónica de Galicia in Spain, and is increasingly in demand as a guest conductor.

The program tilted towards the music of Slobodeniouk’s homeland, starting with Borodin’s Polovtsian Dances from Prince Igor. A chemist by profession, Borodin composed on the side. Although he never finished the opera, the dances have melodies so enchanting that who can fault anyone for humming along to them. Slobodeniouk led a high-spirited performance in which the melodies cast their spell, while the BSO did the rest, reveling in Borodin’s brilliant orchestration.

The Russian spirit prevailed with Wieniawski’s Violin Concerto No.2 in D minor; the composer was born in Poland and studied in France, but he lived in St. Petersburg for 12 years. It was there that the ever-popular Second Violin Concerto premiered in 1862 with Anton Rubinstein on the podium and the composer as soloist. On this occasion, that honor fell to American violinist Joshua Bell, an audience favorite, whose name was on the lips of almost everyone in the audience. He has appeared annually at Tanglewood since his 1989 debut and did not disappoint.

Bell has a penchant for the war horses of the repertoire and his sweet tone and highly personalized style of phrasing are perfect for a Romantic showpiece like the Wieniawski concerto. The beautiful melody of the second movement sang, while the third movement, marked ‘in the gypsy style’, was full of brilliant playing and pyrotechnical thrills, performed with pinpoint accuracy, dramatic intensity and consummate taste.

For an encore, Bell played a selection from the Oscar-winning soundtrack of The Red Violin by John Corigliano. Beautiful melodies played by one of the great violinists of our day are always welcome, especially on a lazy summer afternoon.

The final work on the program was Prokofiev’s Symphony No.5. Michael Steinberg’s program notes detailed a fascinating connection between the work and Boston. Serge Koussevitzky had long championed Prokofiev’s music in Europe and later in America, conducting the BSO in the premiere of the Fourth Symphony in 1930. Although Koussevitzky never returned to Russia after the Revolution, he was aware of the hardships that artists faced there and arranged for music paper to be shipped to the Soviet Composer’s Union. The score of the Fifth Symphony, which is now in the Boston Public Library, was written on paper that had been sent from Boston under his auspices.

In No.5, Prokofiev wrote that he ‘wanted to sing the praises of the free and happy man’. Slobodeniouk drew out the heroic elements of the work; the blazing coda of the first movement and the climax in the middle of the third movement were thrilling. There were dazzling performances from the woodwinds, brass and percussion. With the BSO, no matter how massive the sound or how brisk the tempos, the details are always there. Slobodeniouk relaxed a bit in the slow movement before unleashing the full force of the orchestra in the triumphant frenzy of the finale.

My hunch is that after this impressive debut, Slobodeniouk will again grace the stage at Tanglewood.

For more information on the 2018 Tanglewood season, click here.