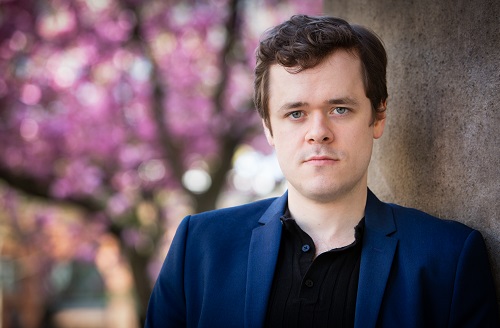 In a programme that straddled, then that melded, centuries, the Britten Sinfonia at Milton Court provided varied, stimulating fare. This concert was part of a tour that also included Norwich and Saffron Hall, as well as, the further reaches of China and Taipei.

The Bach F minor had a familiar ring to it: just over a week ago, in Poznań, Poland, Dmitri Shishkin had performed it with the Amadeus Chamber Orchestra of Polish Radio under Anna Duczmal-Mróz (review). In the less cavernous Milton Court, there was more opportunity for detail to make its mark, and so it was, Benjamin Grosvenor’s ornamentations crisp, his articulation a model of accuracy. Exchanges, or to be more accurate, echoes, between piano and orchestra were managed so as to raise a smile, but it was in the profundity of the central Largo that excellence truly shone. This movement seems to bring out the best in its interpreters (it was Shishkin’s highlight, too), but perhaps Grosvenor penetrated even deeper, his projection perfectly, the string balance at the movement close, with its highlighting of the basses plunging the music suddenly into another realm. It was left to the Presto finale to extricate us, and if even in Milton Court there was some loss of detail due to the acoustic, the effect remained life-enhancing.

Throughout, Grosvenor was very immobile, channelling his musical intent through his fingers. Laudably so, although it meant that describing him as ‘director’ seemed a bit of a stretch. The Mozart ‘Jeunehomme’ Concerto was just as impressive, the first movement a convincingly brisk two-to-a-bar, the second piano entrance beautifully shaped to merge seamlessly with the re-entrance of the orchestra (this concerto is the one that brings the piano in right at the beginning for two exchanges with the orchestra). Grosvenor’s technique is exemplary, the left-hand accompaniment figures perfectly even, the cadenza (Mozart’s) intriguing as Grosvenor allowed the music to take on a separate life, as if entering a different dimension. Far from a token gesture this became a vital part of the equation, the performance full of spontaneity, almost as if it were Grosvenor himself improvising. Wonderfully dusky strings brought in the central Andantino, a movement which found beauty and drama equally matched, Grosvenor beautifully declamatory at the close. The finale – with its remarkable Menuet insert, here the epitome of charm – was a properly scampering Presto, just as Mozart orders.

An encore, just as fresh: Liszt’s ‘Gnomenreigen,’ S. 145/2, one of two Concert Etudes (the other being ‘Waldesrauschen’), under Grosvenor’s fingers a kind of Mephistophelean Mendelssohn. Fabulous.

Separating the two concertos was Robin Haigh’s 2019 composition Grin (which received its world premiere in Norwich on 12 November). Haigh won the British Composer Award at the age of 24, in 2017. He studied at Goldsmith’s College, London and the Royal Academy; he has also worked as an assistant to Birtwistle and is currently on the doctoral programme at York. His Grin, scored for string orchestra with two oboes and two horns, focuses on a repetitive sighing figure. The idea behind it is that while grinning is generally thought to be a happy experience in doing so we reveal the most destructive physical aspect of ourselves. The composer states he was reminded of videos in which destructive machines are paired with ‘peppy music’ to create something absurd. Some of the effects Haigh used were superbly done by the Britten Sinfonia, not least the low flutter-tonguing from the horns; Haigh also asks the horn players to blow air alone through the instrument, which is actually, if heard unprepared, remarkably discombobulating for the listener. Tonal references were also destabilised, and shadows of themes seemed to lurk – was that a snippet of the ‘New World’ or was I completely imagining it? That sort of ambiguity seemed to be very much deliberate. An interesting piece, certainly, although even at ten minutes it was on the cusp of outstaying its welcome. But maybe, that, too, was the point.

Bulgarian-born but based in the UK, Dobrinka Tabakova is a composer who has had several discs of her music issued: see for example MusicWeb International’s reviews of her ECM disc (Steve Arloff here and Rob Barnett here). The entire second half was taken up by her in two guises: composer then arranger. Her own 2013 work Fantasy Homage to Schubert is, for the most part, in her own voice. Towards the end of the piece, Schubert, who has been lurking somewhere waiting to surface, emerges in the form of his Fantasie for violin. Takakova’s score plays with musical layers, seemingly suspended. From the frozen, icy wastes of the absolutely non-vibrato opening (setting the scene for a Winterreise?), the music coalesces on a unison. Lower strings groan under the music’s post-Mahlerian weight before emerging into hazy sunshine. Solo strings reference Schubert’s music, distancing us from it while we simultaneously seek to welcome it.

And welcome it we did: the Tabakova arrangement of the F minor Fantasie followed without a break. Initially the arrangement worked beautifully, the strings’ accompaniment figure identifiably that of the piano original, but timbrally transformed into something perhaps more enigmatic. When octaves are played between two string sections, they take on a whole new meaning, somehow more expressive. High/low exchanges exuded a grim majesty. Some harshness at the very top of the violin register counted against the experience, itself counterbalanced by a thigh-slapping Scherzo and a resolute, powerful fugue. Inevitably the original has a power that cannot be equalled, but Tabakova’s take is nevertheless interesting, especially as she expands the texture at times into nine parts.

A fascinating, well-balanced evening. This concert will be broadcast on BBC Radio 3 on Thursday 5 December at 7.30pm.