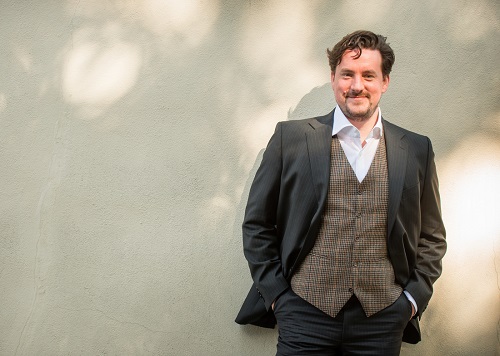 Composers, already a naturally wary lot, really should learn caution when commissioned or inspired to write a piece which showcases the unique talent of a particular performer. Either the resulting score will fall into disuse once its original run of performances has ended, the usual fate of such works, or it will attract curses and execration from later exponents when they have to cope with the difficulties or impossibilities of the music as written.

This is not a peculiar problem of modern music – consider the fate of Massenet’s Esclarmonde, for example. The young Peter Maxwell Davies should perhaps have been chary when he decided to write a song cycle which exploited the extraordinary voice of Paul Hart. Hart not only boasted an extreme vocal range but could sing multiphonics: produce two or more different notes at the same time. The composer employed this weird effect from the very opening vocal line of the first of his Eight Songs for a Mad King. In 2004, the now elderly and respected Sir Peter Maxwell Davies, Master of the Queen’s Music, gave an interview. He wistfully lamented that since Hart’s death only a few years after the première nobody had been able to reproduce this optimistic requirement of his score. In fact, it is far from clear what precisely he had in mind. The notation seems to suggest a series of sustained harmonics built up from an initial bass note, but it is difficult to see how this could be physically achieved or, if it were successful, what the intended sound might be. In any event, the difficulties of the vocal line –it extends from the lowest recesses of the bass voice to the highest extremes of falsetto – are challenging enough in their own right, quite apart from the additional requirement that the solo singer interact dramatically with the players throughout the cycle.

These difficulties have not prevented many singers, by no means all of them specialists in modern scores and styles, from essaying performances of the Eight Songs. Were it not for those practical difficulties, the work might well have established itself as quite a regular inhabitant of the concert platform. Benedict Nelson, who has already performed the cycle in London, has a burgeoning operatic career. His delivery of the near-impossible notes that Maxwell Davies asks him to sing comes closer than a great many to accuracy of pitch, even in the most extreme ranges. Hulking onto the stage like a deranged Peter Grimes in the final act of Britten’s opera, he lurched about dangerously amongst the players. The moment when he seized and smashed the violin from the hands of Hana Mizuta-Spencer was frenzied in the extreme. (Her substitution of a less prized instrument in the moments before the event would have been more shocking if it had been less conspicuous.) Credit should also be given to Hannah Gillingham, whose flute imitation of a caged bird required her to glide about the stage and play her notes from memory while interacting with the singer.

When I last heard this score in Cardiff in 2013, at the Royal Welsh College of Music and Drama down the road, Kelvin Thomas as the unfortunate George III howling in his nightgown had at the end to be pursued by the bass drummer out into the public foyer. I dread to think what might have been the effect on the unfortunate drinkers at the bar! (Earlier in the afternoon, he gave a pre-concert talk on the difficulties of the role, which he has played on numerous occasions; I was unable to attend.) Here, Benedict Nelson retired instead into the nether recesses of the University Music Department, where the sound was allowed to tail away effectively. Now, if some modern electronic means could be found to replicate the notated multiphonics, possibly in the context of a new studio recording, that would be an interesting experiment.

Before the interval we heard three shorter instrumental pieces. The first and most recent of them, Anna Semple’s After Torcello, was described by the composer as ‘inspired by Harold Pinter’s play Betrayal’ and as structured in ‘nine snapshots’ with multiple references to the Italian island of Torcello at the northern end of the Venetian lagoon. Unfortunately, the description, even with the aid of the score, did absolutely nothing to clarify the piece. It seemed to consist largely of various experimental effects, including unexplained vocal interjections and recitations of numbers from the players. Some of those verged on the inaudible. At one point, for example, the violin was directed to ‘slide hand up and down fingerboard whilst bowing on the bridge (no pitch should be heard)’; the result was visible, but any resulting sound was submerged beneath the simultaneous ‘circular bowing’ of the cello. There was no evidence of any ninefold structure. Without further clues as to the nature of the Pinter inspiration, I find myself unable to offer any reasoned comment on the composer’s description of Torcello itself as a ‘highly atmospheric place’.

By comparison, the structure of Richard Causton’s Phoenix was eminently clear. The spiky exclamations of the piano rose from the stillness of the sustained notes in the other instruments, and there was an attractive halo of echo because the composer directed the sustaining pedal of the piano to be held down almost throughout the whole piece. The work itself might be regarded as over-extended for its content, although the final ‘bright image of rebirth’ to which the composer referred was certainly evident.

Best of all in this instrumental first half was Judith Weir’s Blue-Green Hill included as a tribute to Sir Peter’s successor as ‘Master [sic] of the Queen’s Music’. The composer’s jocular note in the programme referred to the ‘ur-modernist grouping of flute, clarinet, violin, cello and piano’ but gave an engaging account of the manner in which the modes of the three movements arose from elements in Scottish folksong. Indeed, for one  glorious moment, something that sounded suspiciously like a richly harmonised Scottish folksong emerged from the texture like the sun breaking through the mists. Given the Maxwell Davies context, it was almost tempting to see the score as a sort of ‘Orkney wedding with hangover’. The effect was often beautiful and always enchanting.

The playing of the ensemble was beyond praise, and Joshua Ballance maintained a good equilibrium between the various instruments. The effect in the opening sections of the Eight Songs was perhaps a little over-strenuous – Benedict Nelson had his work cut out to get the words across in the lower register – but then, one would hesitate to suggest that any performance of this work should seek to pull its punches. A major disappointment must have been the small size of the audience. With two music departments within walking distance, one might have expected a greater turnout at least from the student and academic population. Performances of the Eight Songs are not yet so plentiful that we should ignore them, and it is one of those works which really demand live performances to make anything like their full impact.