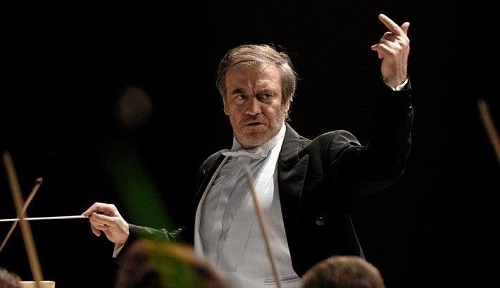 This was, in many ways, a frustrating concert. Gergiev and the Mariinsky had come to Switzerland courtesy of Migros Kulturprozent Classics for a Tchaikovsky cycle, all the symphonies (ignoring Manfred). Outside the hall the electronic signboard proudly proclaimed we would be hearing symphony numbers 1 and 6; except that, as programmed, we actually heard numbers 3 and 4. What’s in a number? Few seemed to care. Two days earlier, in Lucerne at the KKL, they played numbers 1 and 6 and a day later, in Geneva, numbers 2 and 5. Add to that a very odd and, for many, no doubt inconvenient (for a weekday evening) start time of 6pm – but the hall was still full to the last seat. The orchestra apparently wanted to rush off to the airport straight after the concert to enjoy a public holiday (Victory Day) the next day.

The Mariinsky Orchestra (St. Petersburg) is often considered Russia’s finest orchestra and Gergiev has been on the podium there since 1978 (from 1996 as Artistic and General Director). They can, of course, play Tchaikovsky virtually by heart; they don’t need to watch Gergiev, they know what he wants, which is fortunate as I would have difficulty following him with his irritatingly fluttering hands (he dispensed this concert with his ridiculous toothpick of a baton). The orchestra must be bored with and tired of playing these symphonies, though it hardly showed (they were here a few years ago and also played Tchaikovsky). They were, however, unsmiling throughout, never looking as though they were enjoying themselves or the music – they were just here to do another job.

The first half brought us Tchaikovsky’s Third Symphony, too weak for a proper second half, but really too substantial for a first half, especially when the second half has a meatier symphony. It can only be approved of as part of a Tchaikovsky cycle. The Third is infrequently played, and considered by many as the poor cousin of the set of six. It is however well worth the occasional outing, and Gergiev made the most of it. The work is full of Russian spirit and, in part, I must admit, rather enjoyable. I loved the burbling bassoon in the opening movement and the strings in the fleet-footed Scherzo. The nickname ‘Polish’, by the way, is a misnomer; there is nothing Polish about it apart from the use of a Polonaise in the final movement. The work has an unorthodox structure and a very wide range of material rather like a Mahler symphony; it is full of melody and despite its boring, unsophisticated stretches received warm applause.

After a quick interval, on we went with the Fourth Symphony. In the opening Andante Gergiev opted for very slow tempi, winding up the tension inexorably before a very sudden acceleration. Tempi were often quirky: it was as though, having played this work too many times to recount, he wondered what else he could do with it. My view was reinforced after comparing notes with a friend who had heard the performance in Geneva who had the same impression. The strings throughout were muscular and almost militaristic, never beautiful, lush or silken; the woodwind never mellow, the brass often too loud for a small hall and occasionally coarse, and not fluff-free. However, and this is the frustrating part, they were often thrilling, the music is undeniably and audibly in the orchestra’s and conductor’s DNA and they are almost peerless in this repertoire.

A one-minute snippet from the Nutcracker and off they rushed to the airport. The many Russians in the audience went wild.

2 thoughts on “Gergiev and Mariinsky Frustrating in Tchaikovsky Cycle”