Pierre Boulez says “there is no Mahler Tenth”. Boulez knows a thing or two about Mahler, and Boulez doesn’t opine, he utters liquid fact. So what about the ‘performing versions’ of Mahler’s Tenth Symphony? Are they proper Mahler? Are we allowed to listen to them? Are they ‘Mahler’?

We turn to Pierre Boulez again for the answer (albeit via inference): “Schubert is not music.” I love Boulez as a conductor (Mahler or just about anything else) and I enjoy a lot of his music, but his opinions are best taken cum grano salis, or better yet, ignored; at least when it comes to Schubert and Mahler’s Tenth. There is, pace Bernstein, Kubelik, and Boulez, who are among the many Mahler conductors never to be convinced or perform any performance draft, a Mahler Tenth. And the fact that there are so many different versions floating about [1] proves to me not great uncertainty about the ‘might-have-beens’ but great enthusiasm in exploring the limited but extant possibilities. Turandot and Lulu and Mozart’s Requiem have various performing versions, and no one seems to question their right to delight lovers of Puccini, Berg, or Mozart. I’m even getting tired by the all-too careful, often affected way of avoiding the word “completion” talking about Mahler Tenth. We know it wasn’t Mahler who finished it; there is no further need to pretend proper humility by denying oneself this linguistic shortcut.

Jun Märkl, successor of Fabio Luisi as Chief Conductor of the MDR Sinfonieorchester and Music Director of the Orchestre National de Lyon, took on the duties of conducting the 10th in the de-facto completion of Deryck Cooke, Berthold Goldschmidt, and Colin and David Matthews, on Friday, May 20th. Together with the MDR SO – Leipzig’s second orchestra – he made a bold case for the work that defies all theorizing about intent and state of completion. The unquestionably echt-Mahler opening Adagio alone is a whole new level of calm and tortured serenity in Mahler. A thread that would lead the listener from the first note to the last wasn’t found in the light and unwrought performance, but the brass was communicative and a lack of velvety refinement (so speak of “orchestral shrillness” would be going a bit too far), doesn’t work against the Tenth. Instead it can emphasize its character and, in a metaphorical way, its uncompletedness.

Mahler as Orpheus in the Underworld

When the harrowing ten note chords came up – the orchestra sounded like an accordion with all buttons pressed simultaneously. These two gate posts – not unlike in the opening of the Eroica – mark the point of (seemingly) no return; the gates to hell. Riding on the edge of cacophony (intentionally, mostly), the orchestra sailed through the second movement to the erstwhile nadir, the brief stint in the Purgatorio, which had a strangely bubbly quality. Mahler’s comedic course – divine or not – continues onward, in this case with considerable horn and trombone trouble and slipshod percussion moments amid the fourth movement’s poisoned waltz. But the orchestral energy – being challenged and eager – started to pay real dividends and reminded how much better it is to have that, than world class boredom. (If one had to chose, that is.)

The muffled drum that connects the fourth and fifth movement (see facsimile) is a point of contention; some conductors join the outgoing and introducing beat into one or use various styles of instrument and beating it to reproduce this and the following beats. The – for once – convincing Alma Mahler explanation was that Mahler heard a distant tattoo in his hotel room from a passing cortege. Banging on a kettledrum, no matter how well muffled, places the sound far up front in concert – not at all a sound ‘to be imagined’ as something else. The visual element doesn’t help this idea of acoustic uncertainty either, and made me acutely wonder if any conductor has tried playing these beats off stage.

The famous flute solo of the tremendous last movement was exquisite (air-less, accurate, with tasteful vibrato; perhaps a touch proper) and indeed the entire orchestra had saved the best for last. For a long time the path in the finale does not seem to be leading out of hell. One is in closer proximity of post-party Don Giovanni. Even as one passes the horrifying gate posts again, hope does not yet shine through. And then, almost unnoticed at first, there is a ray of sun that the music shines into the darkness. There is mercy after pain after all, rest after restlessness. Consolation after desolation. Even if that consolation is ultimately – Wagner had rubbed off? – consolation in death. The chapter Mahler closes with the faintest, nearly imperceptible notes. Over. And out. 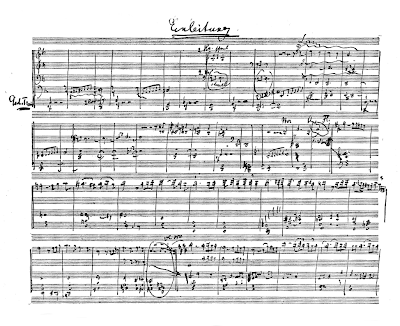 [1] Cooke I – III, Wheeler, Barshai, Carpenter, Mazetti I & II, Samale-Mazzucca and a few others in the making.