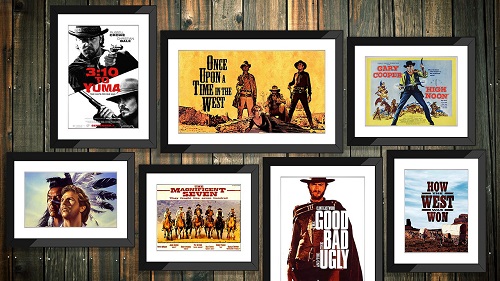 I am not unused to seeing screens around the Royal Albert Hall because recently the BBC Proms have celebrated Dr Who, Sherlock Holmes and David Attenborough’s Life Story by mixing the visual image with the music it inspired. Western Music in Concert is part of the hall’s ongoing Films with Live Orchestra series and indeed the fine orchestra – the Swiss/German 21st Century Symphony Orchestra – and their enthusiastic conductor from Lucerne, Ludwig Wicki, – are in the middle of a series of performances accompanying Indiana Jones: Raiders of the Lost Ark. I am not entirely sold on what draws audiences to such familiar films as this – as well as the forthcoming Gladiator, Amadeus, Independence Day and ET – just because the music is live. But whether it is Dr Who at the Proms or music from some of the great – and on this occasion some not-so-great – film Westerns on the single impressively wide screen, it is all thoroughly enjoyable.

I can list some major influences in my life as the glam rock band T. Rex (also a passion of Antonio Pappano), Rudolf Nureyev, Alberto Remedios (who introduced me to Wagner’s operas), John Wayne and Clint Eastwood, all aided and abetted by never actually having really grown up. So something like this brought back wonderful memories some of which I can endlessly revisit on DVD. Supporting this event was a wonderfully informative printed programme and I would wish those for purely classical concerts could all be equally accessible. (It included a wonderful panorama of that familiar backdrop to so many classic Westerns – Utah’s Monument Valley – and I must have been only one of a few to see it appear even more mystical than it naturally is when shrouded in mist after it had been snowing!) Rick Burin contributed an almost perfect ‘A Brief History of Western Music (in Seven Films)’ from Stagecoach (1939) to Unforgiven (1992) and I wish the music we heard had been based on that. The selection we were presented with was somewhat eclectic, mostly ‘Good’ with nothing particularly ‘Bad’ or ‘Ugly’ but it wouldn’t have been my top choice – no The Alamo (1960) or True Grit (1969), both ideal for this sort of evening – but could there be any consensus between fans of Western music … I doubt it. This programme covered some major releases from High Noon (1952) to 3:10 to Yuma (2007 remake) – plus some German ‘Winnetou’ ones – so had something for every fan of the genre.

The affable host was Tommy Pearson (formerly of the BBC and Classic FM) who in cowboy costume at one point read out a Facebook comment by Bruce Broughton (who composed the score for the 1985 Silverado) how the director, Lawrence Kasdan, made that film ‘for those who had never seen a Western’. Probably quite rightly this concert was aimed at those for whom Westerns were mostly a thing of the past – as such it did absolutely ‘what it said on the tin’. We were welcomed to the ‘Wild, Wild, West … of London’ and while those around me looked like a typical Proms audience it was clear this event was something different – there was an all-pervading smell of popcorn and I doubt the iconic face of the ‘Duke’ (John Wayne) has ever before glowered out into this world-famous venue, nor a herd – real not CGI – of 3500 bison (my favourite animal) ever been seen there stampeding as they were during the Dances with Wolves (1990) sequence! I was right at home then with some wonderful cinema-going memories being triggered already within just a few minutes of the start.

Film clips didn’t always accompany the music but when that was done those were the times when everything gelled. As always on these occasions there were so very many highlights and I don’t want this to descend into just a list of items played so I will just have a few reflections. It was fascinating to be reminded how much the music for American Westerns – the quintessential evocation of the American Dream – owes to a Russian émigré, Dimitri Tiomkin, whose widow was in the audience. He almost pioneered the significance of the title song and as Michael Beek’s programme note explained his score for High Noon ‘plays a vital role, especially in the final montage scene – one of the greatest marriages of film and music in history’. I side with John Wayne (Rio Bravo was his riposte) and have never particularly liked the film itself but I could admire Michael Peterson’s suitably plaintive ‘Do not Forsake Me, Oh My Darling’ and that wonderful conclusion as the clock ticks ominously to ‘High Noon’ leading to the climactic shootout … there is always a climactic shootout! It was Tiomkin’s 1957 Gunfight at the O.K. Corral score that shows how in the best hands film music should rate as highly as more precious classical pieces. There were major hints of his compatriot Shostakovich and some of the sound effects clearly had an influence on the legendary Ennio Morricone when he was composing for the Spaghetti Westerns and more besides.

There is that famous cartoon satirising Mahler‘s Sixth Symphony and the caption translates as ‘My God, I’ve forgotten the motor horn! Now I shall have to write another symphony’, Morricone – whose scores are the most ‘operatic’ of those ever composed for Westerns – never seems to have ignored any potential use of percussion, whistle or ocarina in his atmospheric soundtracks. How great it is he has finally won a real Oscar at the age of 87 for Quentin Tarantino’s otherwise much-underrated The Hateful Eight. If evidence was needed of how great he is the evening ended with a superb rendition of the Main Title from The Good, the Bad and the Ugly with the valiant – if unused – Chorus supporting Kaitlyn Lusk’s musical ‘oohing and ahhing’ and a gripping ‘The Ecstasy of Gold’ sequence as the incomparable Eli Wallach races round a huge desolate cemetery searching for one particular grave.

That this evening worked was especially due of course to the ability of Ludwig Wicki and his exceptional 21st Century Orchestra, Chorus and Soloists to recreate these treasured cinematic moments. How many times have all of us heard the Main Theme from The Magnificent Seven? However, when the film’s title sequence came onto the screen I was transported into some old picture house in North London with my late father sometime in the 1960s: Elmer Bernstein is my personal favourite film composer and I have seen this film – pertly described in Twitter style by Tommy Pearson as ‘There were 7 of them and they were magnificent’ – dozens of times. It was moments like these – and the joyous and rollicking encore of Dmitri Tiomkin’s equally familiar Rawhide theme – that enabled me to leave the Royal Albert Hall with a nostalgic glow in my heart and a smile on my face.

For more information about all events at the Royal Albert Hall visit http://www.royalalberthall.com/.