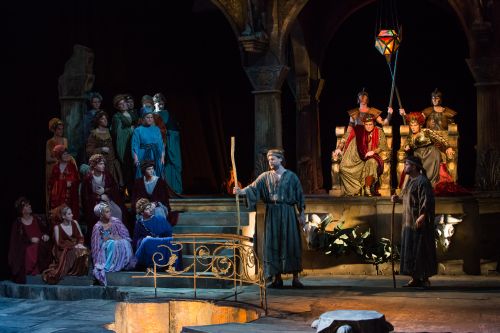 My stay in Budapest came to an end with a performance of Richard Strauss’ Salomé that did not measure up to those I so enjoyed in the preceding days. An outdated  production and a no more than modest protagonist are not sufficient for this opera to succeed….
János Szikora’s staging is an antipode to what he presented the previous day in Die Frau Ohne Schatten. The realistic setting features a building  with columns and balconies and an open space at the front where the cistern is located. Period costumes  ̶  and not very attractive ones  ̶  are the complement. The stage direction introduces nothing of interest, and even the choreography doesn’t work. Sopranos may not be dancers, but there are other ways to get a good result from the “Dance of the Seven Veils.”
The music was the best part of the performance, although I remember better readings by Pinchas Steinberg whose excellent conducting I’ve enjoyed in the past in different theaters. His version was good but something more was needed for the performance to soar. Once again, the orchestra of Budapest Opera House was excellent.
German soprano Manuela Uhl gave life to Salome, but her performance fell somewhat short. She has a lyric soprano voice, which is not bad here; it is known that Strauss was changing his vision of Salome towards a less dramatic soprano. Ms. Uhl’s problems began with an almost  non-existent bottom register, which is not a good thing in this role. The repeated phrase I want the head of Jokanaam was almost  inaudible. Moreover, her voice falls short in richness and color, and I found her singing rather monotonous. I think that either Eszter Sümegi or Szilvia Rálik would have been better as the Princess of Judea.
Jochanaan was sung by baritone Mihály Kálmándi, one of the most popular opera singers in Hungary. His voice is powerful and has a certain appeal, but he shows signs of vocal fatigue at both ends of the tessitura.
German tenor Jürgen Sacher made a good Herodes. Hungarian mezzo soprano Andrea Ulbrich offered more quantity than quality in the part of Herodias.
Zoltan Nyari left an excellent impression as Narraboth. He’s definitely a tenor worth following. Gabriella Balga offered a very small voice as Herodias’ Page.