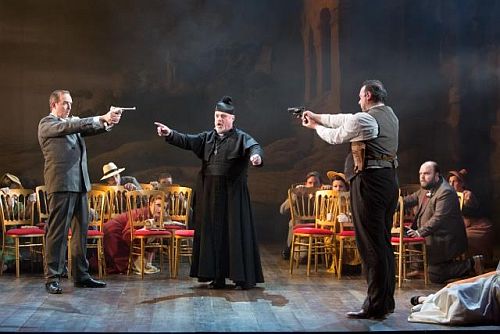 Sung in Italian with English surtitles.

The success of Anna Bolena in Milan 1830 and L’Elisir d’Amore (1832) marked Donizetti out as a leading contender, with Bellini, for the pre-eminent position among Italian opera composers. He went to Paris in 1835, at Rossini’s invitation, to present a work at the Théâtre Italien. This visit introduced him to the ‘Grand Opera’ style of Meyerbeer and Halevy. Donizetti also discovered, as other Italian predecessors had done, the significantly higher musical and theatrical standards that existed in Paris compared with their own country – even in Naples where he was musical director of the Royal Theatres, and in Milan. Equally appealing to a composer, who had to write and present three or four new works each year to maintain a decent living, was the superior financial remuneration for work in Paris. Whilst his opera was rather overshadowed by Bellini’s I Puritani premiered at the same theatre a couple of months before, whilst in Paris, Donizetti was made Chevalier of the Legion of Honour, which further indicated his prestige in musical circles.

With his opera neither a failure nor a raging success in Paris, Donizetti returned to Italy and presented Lucia di Lamermoor in Naples on September 26th. This was a huge and immediate success. To this day it remains the composer’s most popular serious, as distinct from comic, opera and is widely considered a foundation stone of Italian Romanticism. With the premature death of Bellini shortly before Lucia’s premiere, and Rossini’s retirement from operatic composition, Donizetti was elevated to a pre imminent position among his contemporaries.

Based on Walter Scott’s novel The Bride of Lamermoor of 1819, Lucia was Donizetti’s 47th opera and the first of three he was contracted to compose for Naples’ Royal Theatres, and scheduled for May 1835. Despite Donizetti’s position, and his also being professor at the Conservatorium, the San Carlo management, in financial crisis and inefficient, failed to get the story cleared by the censor and a libretto commissioned. Consequently the premiere was delayed until September 26th when the opera was received with acclaim. Increasingly irritated by the working conditions in Naples and the restrictions imposed by the censor, Donizetti’s thoughts turned increasingly to Paris and he returned there in 1839 to present a simplified French version of Lucia at the Théâtre de Rennaisance where it was a great success. He followed this with three operas in French, including two for the Paris Opéra itself and one for the Opéra Comique.

The story of Lucia di Lamermoor is bleak whilst Cammarano’s libretto, based on Sir Walter Scott’s novel The Bride of Lamermoor, is taut, clear and concise. It draws from Donizetti a parallel tautness of construction in which the music consistently serves the drama. It also draws from him a prodigality of melodic invention. The story involves a fiery bullying brother, Enrico, who is prepared to sacrifice his sister, still grieving from the death of their mother, to a marriage of his choosing. His choice of groom is Lord Arturo, a wealthy noble whom he hopes will save his own precarious financial position. The marriage is violently against Lucia’s wishes as she is in love with her brother’s sworn enemy Edgardo, with whom she has pledged mutual fidelity. Enrico produces a false letter indicating Edgardo’s faithlessness and after bullying her tutor and adviser, Raimondo, into support, has Lucia sign the marriage contract. During the wedding celebrations Edgardo arrives. Believing Lucia to be unfaithful to their mutual promise he demands the return of the token he gave her, flinging the reciprocal one at her. Lucia is distraught and on retiring to the nuptial bed she stabs and kills her groom and returns to the celebrations for one of the greatest mad scenes in opera and involving coloratura vocal flights, with flute obbligato, that epitomise bel canto. Lucia dies and in a final scene and Edgardo stabs himself. This final scene is dominated by Edgardo’s double aria preceded by the recitative Tombe degli avi mei (Tombs of my ancestors).

Un recent times Lucia di Lamermoor was the vehicle made famous by Callas (Review) and provided the launching on, 17th February 1959, on the world of the spectacular coloratura singing of Joan Sutherland who became known, first in Italy, as La Stupenda. As was common at the time the staging for both those great singers involved traditionally costumed productions clearly set in in period and in Scotland.  In his pre-performance talk, Director Stephen Unwin, accompanied by his designer, explained his decision to break away from tradition with a production set around the period of the Second World War Italy, the period of la dolca vita, but not (he stressed) being too radical and making it a Mafiosi based production. The latter point, however, did not preclude much on stage cigarette smoking and the regular appearance of pistols! With no plaid in sight, the nearest the audience got to the Scotland of Sir Walter Scott was the two wonderful and evocative full width hand painted draw curtains, front and rear of the stage, of Italian ruins. These could just as easily have been the ruins of Ravenswood except, perhaps, they would have been more likely shrouded in mist than sunlight!

Enrico, the bullying brother of Lucia, as a near bankrupt business man behind his desk, was sung with strong but somewhat monochromic tone by Stephen Gadd. His is a formidable physical presence as well as being strong vocally, more Puccini than even Verdi, let alone bel canto. Richard Roberts played Enrico’s henchman Normanno as a sleazy sidekick who did his master’s bidding whilst lacking some tonal mellifluousness. Andrew Greenan, as Lucia’s mentor was rather lacking in both vocal sonority and smooth legato. This significantly undermined his acted interpretation; too much Wagner I suspect for the ideal legato and vocal expression required in bel canto.

Recognition of the genre was somewhat lacking in Stephen Barlow’s Act One, played for drama and rather neglecting the lyricism of the meeting of the lovers and their exchange of promises and tokens. Fortunately he did get more into the idiom in time for the famous Act Two mad scene when the deranged Lucia appears at the marriage festivities, bloodied and carrying the knife with which she had stabbed her recently betrothed husband. This major role was taken by Elin Pritchard, a Welsh soprano and graduate of the National Opera Studio who has yet, as I read her CV, to make her debut with her National Company. She has sung abroad as well as for the likes of Opera Holland Park, British Youth Opera and Lucia in the small theatre at Clonter Opera. The most important thing to note is that with excellent direction by Stephen Unwin, and good support from Stephen Barlow who had found his bel canto form, she acted the famous mad scene and managed the fiendish coloratura with good vocal runs and expression whilst convincingly portraying the deranged Lucia.  Perhaps WNO will find at least a cover for her in their forthcoming Autumn venture in bel canto, Bellini’s I Puritani. As Lucia’s maid Alissa, Natalie Sinnott sang with warm steady tone and acted her role well as did Bonaventura Bottone singing strongly as an appropriately elderly suitor for Lucia.

When it came to Lucia’s true love, Edgardo, we heard some true bel canto singing and vocal elegance from Adriano Graziano. His name implies some Italian background and he certainly exhibited most of the Italianate squilla heard in the performance. With his slim figure, clear diction allied to a good variety of tone and colour he was a great strength to the production. He made the last scene a highlight with Edgardo’s double aria, well supported by Stephen Barlow. Graziano’s CV says he studies with the renowned Welsh tenor Dennis O’Neil CBE. That is good news for his promising skills, as long as he does not follow his teacher by undertaking very heavy tenor roles too early!